It was a bittersweet night at the sold out, 10th annual Long Island Fight For Charity held at the Huntington Hilton in Melville, Long Island. Sal “The Hammer” Ferro of Alure Home Improvements, took on Kevin “Spider” Kelly of BigBuzz Marketing in the night’s main event. Ferro, a first time participant, and Kelly, a return boxer, committed to this event and effort to raise money for several great charity organizations which the Long Island Fight For Charity supports. For those not familiar with the event, this is no joke. Participants must train for months with a professional boxer, meet weight requirements, pass sparring tests, get a fight card signed off by a doctor, and pass a physical to compete in an officially sanctioned boxing match. The only difference from an actual prize fight is this is not for a belt, but for charity. Both Ferro and Kelly are no strangers to supporting their local community, as each are involved with numerous other charitable endeavors. Kelly is very involved with Michael J Fox Parkinson’s Foundation, Sanyuka Hole in the Wall Camp in Kampala Africa, Moms Who Kick and Rock Can Roll among many others. Ferro, is on the board and a supporter of The Interfaith Nutrition Network, Find A Cure Today, Farmingdale College Foundation, The Clark Gillies Foundation, Joining Everyone to Share, as well as many others. 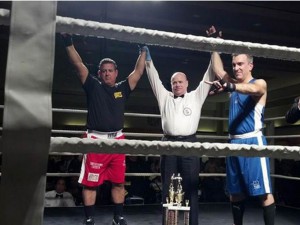 The sweet part, was that after months of training in the gym, and working with professional boxer, Robert Vanacore of East Northport’s Fitness Through Boxing, Ferro won his fight by TKO. Rumor has it The Hammer has had some non-sanctioned fights back in his day, regardless he took this commitment seriously. In preparation for this event Sal spent 3 days a week in the gym for the past 3 months, altered his diet, and added other cardio work on his off gym days. However, the result of the fight itself was more bitter than sweet. If you know Sal Ferro, then you know he has a heart of gold and would never, especially in a charity event, want to see anyone hurt, let alone a class act like Kevin Kelly. Unfortunately, Kevin, after an exciting 30 second flurry of exchanges with Ferro, got caught bobbing when he should have weaved, and Sal landed a hammer of a right (yes, Sal not only swings a hammer, he hits like one too) early in the first round of the final bout of this great evening. These two amazing Long Island Business Men put on a great display of boxing and philanthropy, as they exchanged a flurry of rights and lefts for charity in one of the most exciting fights of the evening. In the end, it was clear who the winner was... it was the Long Island Fight For Charity organization, and the thousands of Long Islanders helped by the many great charities this event supports.

The sweetest part of the evening, were the records set for fundraising to help these great charities. This was the 10 year anniversary of the Long Island Fight For Charity and we are proud to announce TWO records. The previous record for funds raised by any one boxer participating, was $45,000. The Hammer crushed that record, raising close to $80,000 with a combination of sponsorships, donations, ticket sales and a few guest bartending fundraisers along with the way with good friend, Hall of Famer Clark Gillies. And the event raised over $290,000, also a Fight For Charity record. The event was a sellout, that required a last minute addition of several hundred seats, and to accommodate the demand, the event was also available on live streaming for a $20 donation. Over 250 of the 1,400 attendees were there to support the Hammer!! 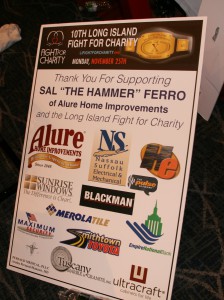 On behalf of Alure, we’d like to thank our trunks and shirts sponsors:

To see a full list of all sponsors and supporters for the Long Island Fight For Charity, click here See Alure’s FFC photo gallery. To relive The Hammer’s journey through video, click here. Coming soon: a final recap of The Hammer’s entire journey. The fight morning started with a visit by the Hammer to Fox 5’s Good Day New York, for an interview with hosts Rosanna Scotto and Greg Kelly, leading up the big event. At one point, the Hammer had to hold back Greg Kelly as he sparred with sports anchor Duke Castiglione. That interview can be seen on the Alure fan page. Stay tuned for an exciting video recap coming in the next week, highlighting the Hammer’s entire journey, to be posted on our Facebook Fan Page.