Mike Kuplicki is the Director of Sales for Alure Basements and Sunrooms and has been in the Remodeling field since 1975. Read more of Mike’s remodeling stories here.

Way back when I had my own remodeling company, we were adding on a small addition to a home in Oceanside, New York. The extension was off the kitchen and the homeowners had packed up everything they could in the living room – including a “rather loud” Cockatoo. The clients were both teachers and had left us alone in their home while they were at work.

The exterior shell was completed and we started the interior finish. As with most projects when you are carrying boards of sheetrock, the doors are left open so you can carry them in and not damage the board or the doors. We had a crew of 6 men and as one of the teams were carrying in their sheetrock, I heard one of the guys say “what a pretty bird” as the Cockatoo flew OUT THE DOOR!

You can imagine how I felt at that moment whole range of emotions, from feeling bad for the homeowners as their pet left to, I’ll admit, worry about what it was going to cost me! At lunch I was trying to figure out how I was going to tell Jeff and Sue when the “guys” started to think “out of the box” on what might have happened. One of the most creative stories – the clients had a dog as well that stayed gated up in the dining room. The guys said we should go into the bird cage and take out a few feathers then GLUE them to the dogs mouth! 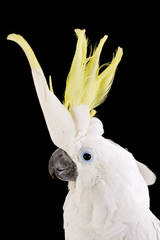 Fortunately, reason overtook me and I just decide to let Jeff know the truth – I had no idea how the bird got out but it did – on my watch. Jeff arrived home before Sue and I said I had some bad news and related the story – at that point I figured it was going to cost me – even though we certainly would not have opened a bird cage – probably some real money!

Jeff heard me out then threw out his hand and said “Thank you! I hated that bird, Mike. It was given to us as a gift a few months ago and Sue and I had no idea what a pain in the neck it was going to be!!!”

You can’t make this stuff up!