At Alure Home Improvements we know that good value for products and service has always been in style.  Our two cents are always available to you when considering any home improvement.

Generally well understood throughout Great Britain and the United States the origin of the phrase a penny for your thoughts dates back to the Middle Ages.  During that time a penny was worth a lot more than today.  When asked a penny for your thoughts, it was a considerable compliment and to this day should be valued as an honor to impart your opinion to the imploring listener.

This phrase is not the only thing valued by the penny from back in the day.  A seemingly unstudied part of human history is related to the common Nail.  You are more likely to find them in homes built before 1950 but you never know what you might be behind the wall you repair or inside the wall cavity of the windows you plan to replace. Don’t be surprised to find a cut nail like the ones in the picture above behind exterior siding or in the substrate to the roofing shingles on your home.  Even several thousand years ago, the nail was always associated with fastening and joining.  By around 1477 AD a system was in place to classify nails by size according to their price.  The price was also based upon a unit or (lot) of 100 nails.  The letter d which means penny stands for the Latin name given to Roman coins, Denarius. 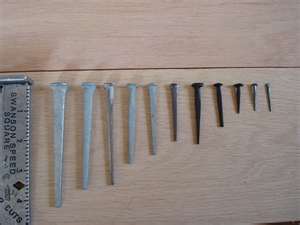 The size of the nail is determined by measuring its length.  Nails start at 2d, which is 1 inch in length and range up to 60d which is 6 inches in length.  From 2d to 16d the penny length increases by quarter inches.  Above 16d, the size increases by half inches.

The value of a penny is further emphasized by the early American settlers.  Just prior to the American Revolution, England was the largest manufacturer of nails in the world.  This made them virtually impossible to obtain in the American Colonies.  It was not uncommon for settler families to have a small nail manufacturing setup in their homes by the fireplace.  During bad weather and or at night, entire families made nails not only for their own use but also for barter.

This was a practice that was not restricted to the lower classes.  Thomas Jefferson was quite proud of his hand made nails.  In a letter he wrote “In our private pursuits it is a great advantage that every honest employment is deemed honorable.  I am myself a nail maker.”  Jefferson was one of the first to purchase the newly invented nail-cutting machine in 1796 and produce nails for sale.

Such a value was placed on the penny nail product that it was common practice, when moving, to burn one’s home in order to retrieve them.

The invention of the nail cutting machine rapidly placed the United States as the world leader in nail manufacturing which still remains the case today.  During the 1850’s several manufacturers came out with wire nails.  They generally were not considered strong enough for construction until after the Civil War.  However there is no substitute for the holding power of the cut nail.  It was well into the 20th century before the wire nail became the dominant type and mainly because they offered a great deal of economy in price.

It is because of the tremendous holding power and hardness that cut nails are still used today for specific functions such as flooring nails, boat nails and masonry nails.  The holding power of nails actually drops by half after two days since being driven.  Within a month the holding power of a nail begins to increase slightly as the wood fibers straighten and then begin to grip the nail. 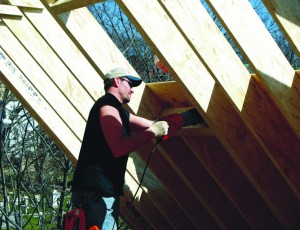 General framing for new construction is usually still managed by the use of nails or nail products used in nail guns.  The shear strength of nails is far superior to screw counterparts and is still less expensive. While cut nails are still part of the economy and bring strength to their individual projects as mentioned above there is nothing cut rate about the Alure vision.  Our always free in-home design consultation enables any potential home improvement customer the opportunity to learn more about a project they may wish to consider.  Asking a penny for our thoughts will forever be our pleasure to convey.

Find out more about the Alure Vision and information about any of your home remodeling needs at our website.