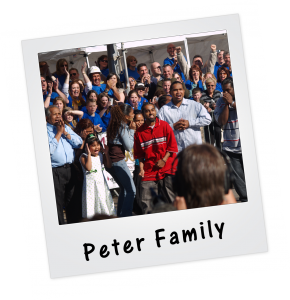 As we headed into the Lutz Family build for Extreme Makeover: Home Edition last year, our friends at the Long Island Press printed a series of stories re-living each episode and family we helped prior to the Lutz Family. We were inspired to share each piece with you after the Season 9 premiere of Extreme aired on Sunday night. Here is the story of our fourth episode for the Peter family. Winston and Hardai Peter emigrated from Guyana in 1996 to Jamaica, Queens in search of the American Dream. But tragedy struck in December of 2004, when their tri-level colonial home burst into flames, depriving them of not only a place to live, but all of their possessions. After only 6 months, the family was forced to move back into that home with no heat or hot water, and limited to electricity. The family cooked on a makeshift propane stove, boiled water when they needed to bathe, covered broken windows with plastic, and concealed fire damage with drywall. Winston felt as though he had let his family down. But as a priest, he didn’t make enough money to repair his home. Extreme Makeover: Home Edition tapped on Alure President Sal Ferro’s shoulder to help the Peter family rise out of the ashes. Alure responded to that call in a very big and generous way! But that task presented some unique challenges. First, the house is located in a congested part of Queens where the houses are very close together – so close that it was too dangerous to use machinery to demolish the home. It had to be torn down completely by hand through the night. As Alure took down the walls, they found that the original exterior walls of the home were sitting on dirt without footings and without a foundation to support them. On extremely short notice, Alure had to order 35 yards of concrete, dig a trench around the entire existing slab, pour and spread the concrete evenly, then wait for the concrete to dry. This extra task set Alure and the entire production of the house behind while the framing crew waited for the concrete to dry. But everyone worked double time to get back on schedule. While Alure Home Improvements, contractors and hundreds of workers and volunteers built a new house for the Peter family, the family went on vacation to Walt Disney World. When they returned to Queens, they had a home to call their own. As tears poured down their faces, the Peters embraced Sal and the rest of the Alure team with appreciation and thanked them for letting their family dream once again. Sal Ferro summed up the entire experience when he said: “Just seeing the look on the family’s faces when they see their new home makes all this worth it.”