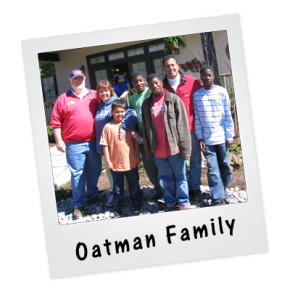 In March of 2007, Alure President Sal Ferro was contacted with a slightly different request from Conrad Ricketts, co-executive producer of Extreme Makeover: Home Edition. The show had selected a family and had a contractor scheduled to handle the renovations to the home of that family. But the show wanted to go a step further, and also help out a non-profit camp that helped thousands of children, notably, the children of the Oatman family, for whom the show was building a home. In 1987, Debbie Oatman became a very untraditional single mother when she adopted an HIV positive baby named DJ. Together they faced an unsympathetic community, discrimination
and even death threats. Yet, when she learned that another HIV positive child and his biological brother needed a home, Debbie didn’t hesitate to bring them into her family. A single mother with four sons, Debbie’s home was literally sinking into the ground. Built on a shoddy foundation, the Oatman-Gaitan home became a death trap to Debbie’s sons’ delicate immune systems. Debbie was given an estimate of $25,000 just to lift the house and was terrified that the condition would lead to respiratory illnesses in DJ and Brian. For most families this would be a minor annoyance, but for children with HIV, a respiratory infection could be fatal. Having been through five makeovers already, and putting his team through the grueling 20-hour days, Alure President Sal Ferro was admittedly hesitant this time around about taking on a sixth makeover challenge. Before committing, Ferro visited the Clearpool site with his right-hand man, VP of Operations Doug Cornwell. After learning about the camp was a non-profit facility that caters to underprivileged children, they both felt compelled to help out, and Ferro saw another opportunity to inspire many others. Camp Heartland is an organization that caters to children with HIV and their families. It has been instrumental in helping Debbie’s boys learn to accept their situation. The camp, whose headquarters are in Minnesota, came to the East Coast for the first time in 2007 to Clearpool Education Center. It’s a 100-year-old non-profit camp that caters to underprivileged children in the tri-state area. The facility was in need of a few renovations in order to adequately host the special needs of the Heartland campers. The show decided to build a recreation center at the CEC where the Oatman boys visit with other HIV children from camp Heartland. This was a special project for Ferro and his team, as the build not only impacted the Oatman family, but will also impact thousands of other underprivileged children in the tri-state area for years to come, something that means a great deal to Ferro. Support from the community was overwhelming, much like it was in the Arena family project. In fact, a lot of that support was provided by the Arena family and their network of friends and family. This was a unique opportunity to help improve the experience for thousands of underprivileged kids and yet another opportunity to bring a community together.