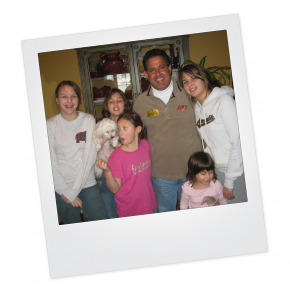 As we headed into the Lutz Family build for Extreme Makeover: Home Edition last year, our friends at the Long Island Press printed a series of stories re-living each episode and family we helped prior to the Lutz Family. We were inspired to share each piece with you after the Season 9 premiere of Extreme aired on Sunday night. Here is the story of our fifth episode for the Arena family.
Diagnosed with an inoperable brain tumor at 5 years old, Jimmy “Jimmy Boy” Arena stayed strong. He touched the hearts of neighbors, community members, several fire departments, officials and his own family with his infectious smile and spirit. Everyone in the town of Purdy knew Jimmy Boy and prayed for him. They held fundraisers, birthday parties and even a parade to welcome him home from the hospital. But on September 28 2005, shortly after his 6th birthday, Jimmy Boy passed away. The Arena family had lost their only son.

The family had saved enough money to repair and add onto their small home for their growing family, but when Jimmy Boy was diagnosed, the funds went to experimental treatments across the country, medical care and travel expenses. The same community who supported Jimmy Boy wanted to pay tribute to him and help his family. That’s when Extreme Makeover: Home Edition called upon Alure Home Improvements for help.

Alure’s own resources were stretched thin since they had just completed the Peter Makeover in Queens just two weeks prior, but they accepted the challenge. Fortunately, Sal Ferro’s friend, Kathi Cline, recruited over 150 volunteers from Helmer Kronin of Rockland County to help. A few members of the Peter family volunteered as well.

As with all of Alure’s makeover projects, the Arena home had its own share of obstacles. Perhaps the most difficult was the need to frame and side a 3,800 square foot home in three days of pouring rain, while maneuvering around in a mud fest. The rain was so heavy at times that nail pouches on the workers tool belts were filled to the brim with water. Alure’s installers literally had to dig into pools of water every time they pulled out a nail. But, the crews braved the days of heavy rain, and kept on working with a smile.

Alure once again rose to the challenge and for the fifth consecutive project, completed the makeover on time, safely, and turned over a beautiful new home to the Arena family.

Doug Cornwell, Alure’s Executive Director of Operations said, “At an incredible 3,800 square feet, this is the largest home we have built for the show. It is amazing to witness the persistence and accomplishment of our team.”

The volunteers and outpouring help from the community was incredible. Hundreds of people signed up as volunteers and helped out in any way they could. They cleaned up, donated supplies, delivered home-cooked food and drove shuttles. The town restaurants brought platters and even held a barbeque. Holistic practitioners offered massages and chiropractic services for the tired workers.

Alure President Sal Ferro said: “This was by far the toughest build we’ve done yet. The constant rain was a major concern for me but everyone kept their spirits high. When Gina Arena saw her new home and hugged me it was as she hugged all the tension and exhaustion right out of me and gave me a new energy!”

Jimmy Boy’s spirit was felt through all the voices that cheered the Arena’s into their new home.