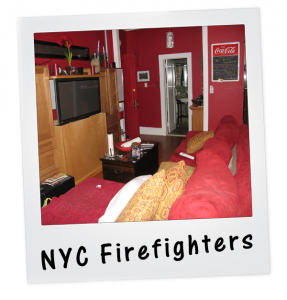 As we headed into the Lutz Family build for Extreme Makeover: Home Edition last year, our friends at the Long Island Press printed a series of stories re-living each episode and family we helped prior to the Lutz Family. We were inspired to share each piece with you after the Season 9 premiere of Extreme aired on Sunday night. Here is the story of our first episode, “Friends Helping Friends.”

Extreme Makeover: Home Edition, known for doing huge remodeling jobs in only five days, had an even crazier idea: Renovate an entire New York City apartment in 12 hours on live television for two FDNY firefighters. They found only one company with what it took to pull it off: Alure Home Improvements.

Executive Senior Producer at the time, Conrad Rickets, called Sal Ferro and told him he had heard Alure was the best remodeler in the area. He invited Alure to take on the project of the show’s first-ever New York Makeover. It was also the first and only Extreme Makeover to date that was broadcast live on national television. Rickets raves about Alure’s performance, “From the first moment, I knew we found the only company in New York State that could take our five days and nine hour show and compress it into twelve hours. Alure’s vision of how to take this apartment and make the best use of space was nothing short of brilliant. The ability to organize the scope of work and then to execute it shows why Alure is the top builder. It is the quality of Alure’s work that stands out…the New York Live show [was] one of our best.”

The apartment was in rough shape. Sal Ferro, President of Alure, recalls, “It hadn’t been touched in the 80 years since it was built. You just had to touch the walls and they started to crumble. But we were ready for the challenge. We had the years in business and the history of doing the right thing; we had the resources, the infrastructure, the leadership and the manpower in place to make it happen.”

As with all of Alure’s jobs, planning was the key to success. Doug Cornwell of Alure, who designed the kitchen and bath said, “We did an hour-by-hour schedule for every task in the apartment. Everyone knew where they had to be when, and what they had to do. Honestly, it wasn’t much different than what we do on every job, except the time was very compressed.”

Alure used the same process they do on every job: consulting with the homeowners on their wants and needs, creating a design to accommodate them, doing pre-production to make sure every spec is correct, and managing the project so it is done on time, on budget, and to impeccable quality standards. To a person, the Alure crew was energized and positive, describing the experience as “one of the best experiences of my life,” “rewarding,” “satisfying,” “intense” and “phenomenal.” After the project was completed, Ty Pennington said that, “Alure delivered big time for Pete and Joe.”

The firefighters agreed. Pete said, “Alure literally transformed a real old apartment with old everything-fixtures, floors, walls – into a brand new modern apartment. It’s amazing. It’s 10 times better than what I would possibly have dreamed of.” Joe agreed: “The amount of work that Alure did in the amount of time they did it and the quality of the work… it’s exceptional. We love the place. It looks awesome.”

Alure wasn’t really sure what they were getting into and at the time they were not that familiar with the show. While it worked out successfully in the end, the build was a nightmare from the beginning. They were very proud to have accomplished the project but were convinced when that show was completed, they would not be involved with any future episodes.