When Alure says “We go to extremes to build your dreams,” that doesn’t just mean new kitchens, baths, siding, and basements.  Alure also  goes to extremes to create dream vacations: I know that for a fact, because my husband and I were among the 17 couples who went on the Partner Points trip to the Dominican Republic in March 2012!

We first heard about Partner Points when we were considering hiring Alure for our remodeling projects, but we were so involved working on our home on Long Island that a vacation in the Caribbean wasn’t anywhere on our radar. A free trip also sounded too good to be true and with having to choose  granite, tile, cabinetry, hardware, paint colors, etc., for three bathrooms and a kitchen, who had time to keep track of Partner Points, anyway?

Well, we learned the answer to that when we got a letter from Alure’s CEO, Sal Ferro, about a year after they began working in our home, telling us that we had reached the halfway mark toward the 200,000 points needed for a trip to the Caribbean! But wait, there’s more. Sal’s letter said that because we’d obviously been spending a lot of time (and money) on our home, he wanted to make sure we also were having some fun time with our family, to the tune of $500, his treat. We were totally blown away by this unexpected gesture, and happily took our four oldest grandchildren to a Broadway show and dinner and had a great time!

Fast forward to fall 2011: The phone rings, it’s Lindsey from Alure’s marketing department asking if we would like to go to the Hard Rock Hotel & Casino, in Punta Cana, from March 10-17!! We had amassed 200,000 points without even realizing it, from the work we did on our home, the referrals to friends and neighbors (VERY easy to do when you’re as pleased with your job as we were!), and attending a Friday night Caribbean party at Alure’s showroom. The answer to Lindsey’s question – definitely yes!! I wish it had been as easy to decide on the backsplash for our kitchen!!!

From that point on, all we had to do was provide a copy of our passports, pull out our bathing suits and flip-flops and stock up on sunscreen. Actually, a few days before the trip, Lindsey called and asked if I’d be home later in the day; she wanted to drop off something at the house.  I knew she wasn’t bringing our airline tickets or our itinerary – we’d already gotten the full rundown on the trip from Seth, the marketing director: e-mails about everything from the flights (American Airlines) to the amenities at the resort, a run-down of off-site excursions, the welcome dinner, and the one thing that we were required to do: Have Fun!! But back to the reason for Lindsey’s visit, she brought us a carry-on bag filled with sunscreen, body lotion, sunglasses, etc., a bunch of goodies to make sure we were well prepared for a week in the sun! Oh, yes, I should mention that someone at Alure must have a good connection with the weather gods, because it was perfect all week – sunny, breezy, not too hot; the only time it even drizzled a bit was late one night when we were walking back to our room, and the rain was so light we actually thought the wet ground was from lawn sprinklers.

On Saturday, March 10, the party bus to JFK left from Alure’s Plainview offices at 4:30 a.m.(!), but despite the early hour, everyone was cheerful and chatty, and the Alure staff very welcoming and helpful. The group was composed of clients (like us) and employees who had also earned enough Partner Points and Sal. Actually, Sal was the last person to arrive, he’d forgotten his iPad and went home to get it. Someone (I won’t say who!) joked that we should just leave without him. . . but since Sal was paying for the trip, that thought was quickly dismissed!

When we arrived at the airport, Sal and Seth collected all the passports and luggage and took care of the whole check-in process (one of my least-favorite parts of traveling!), while the rest of us stood around in the American Airlines terminal chatting and getting acquainted and, in our case, re-acquainted (two of the Alure staff who were going on the trip had been involved in our remodeling project).  The flight was on time, and by early afternoon we were walking across a sunny, tropical airfield in the Dominican Republic, going through customs, and then boarding a charter bus that took us to the Hard Rock. As it would be for the rest of our vacation, we didn’t have to lift a finger to do anything (except have fun!): Our luggage was off-loaded and we were directed to a special VIP check-in lounge, where hors d’oeuvres and drinks were waiting – along with concierges who called each couple up to the counter to check us in and give us our keys and room info, while the rest of us ate, drank and relaxed – one of the many perqs of our Rock Star Status at the hotel. Before we were driven to our rooms, a concierge explained the Resort Points that came with our reservation – kinda like free money to spend on a variety of special resort amenities: a romantic lobster/champagne dinner, off-site excursions, massages, shopping, etc. Actually, it wasn’t kinda like free money,  it was free money!

The whole Alure group was staying in a building closest to pools and the beach (great location!), and right next to the restaurant that turned out to be our favorite. Hard Rock is a huge, sprawling resort with lots of places to eat and drink, some inside the main building and others all around the property, and over the course of the week we tried most of them. The night we arrived there was a group dinner on the beach right outside our building; it was a great way to start our vacation, sharing good food and drinks with fun, friendly people while swishing your feet in soft, clean sand.  Afterwards, my husband and I hopped on a tram to go to the main building; there was a cool breeze and the smell of the Caribbean was intoxicating (a far cry from the chilly Long Island we left just that morning!), and with the buildings, restaurants, pool areas and lush greenery dressed for evening in twinkling lights we wound up staying on the tram as it went around the entire resort, and on the second go-round, got off and feeling lucky, went to check out the casino.

We didn’t win that night, but we felt lucky nonetheless: We were on an all-expense paid vacation at a beautiful all-inclusive resort in the warm and sunny Caribbean, guests of the company that did our home remodeling – how crazy lucky is that!! Mostly, we slept in, stayed up late, read, relaxed and sipped pina coladas at the pool, did water aerobics, ate, walked on the clean, beautiful beach, played miniature golf, ate, had manicures and pedicures (a first for my husband!), took private Spanish lessons, ate (hey, we had to check out all of the restaurants!), shopped, tried our luck (again. . .and then again) at the casino (win some, lose some). And at the end of a hard day, what better way to unwind than in the Jacuzzi that was right in the middle of our bedroom and then sit outside on our private balcony!

During the week, we spent some time with others from the group who we met up with at a pool, in a restaurant or just while walking around. Sal hosted a party in his suite one night, and on the final night, we all got together for cocktails and then dinner at Isla, a Caribbean-themed restaurant.  By then, we had gotten to know some of the others quite well but there were some people we hadn’t seen at all since the day we arrived. So it was fun to compare notes about what we’d done, our favorite restaurants, where we’d shopped, etc. The next morning, our luggage was picked up and taken back to the main building, where we boarded a bus for the ride to the airport. Happily, our flight was on time, and once back at JFK, after making our way through the long lines at Customs, we boarded the party bus that took us back to Alure’s Plainview headquarters, where our car had been parked all week. Once again, Alure employees – vacationers just as we were, went out of their way to be helpful, dragging our luggage from the bus and loading it into our car. Like I said in the beginning, Alure really does go to extremes to build dreams, whether it’s a kitchen, a bath or a basement . . . or a fabulous, all-expense paid trip to paradise! 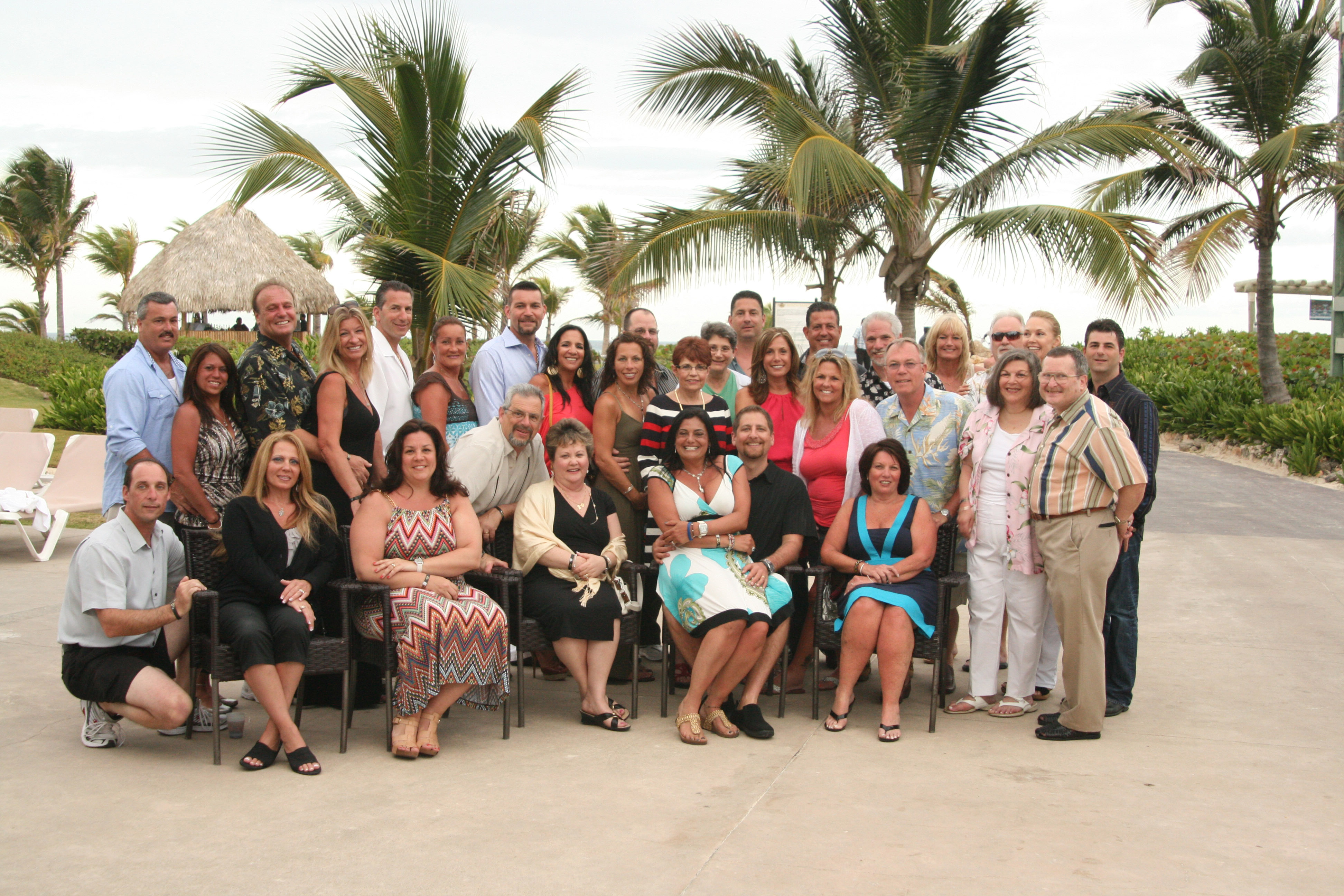