Time spent in any business seems to generate anecdotes about experiences and situations that are just too funny to be true.  After 36 years in the remodeling business the stories have begun to pile up.  Some of them are serious, some funny, all of them true with something to be learned.  Doug Cornwell: VP of Operations, Alure Home Improvements

It never ceases to amaze me the lengths some people will go to deceive someone. I often wonder how productive these people would be if the same amount of creativity and energy were put forth in a positive manner. This is a story that takes seeing is believing to a new level.

It started when I was called to do an estimate in a very large expensive waterfront house.

The community is well known for people who worked on Wall Street and often commuted by helicopter to New York City.  The potential client was looking to remodel a basement bathroom that would be used as part of their beach-front accommodations. It contained the standard commode, sink, vanity and 48″ shower stall.  To be honest, it looked brand new and showed little or no usage at all.

I asked all the standard questions in terms of design, colors and budget but the client said they had no issue with the style, color or design. I questioned if they wanted to upgrade the fixtures to something more stylish. Their approval was less than enthusiastic. I questioned how long they had lived in the house and was surprised to hear that they moved in three weeks prior.

The husband looked at me and said Flush the toilet.  I did and it made no noise at all.

He said Turn on the sink. I did, nothing came out. 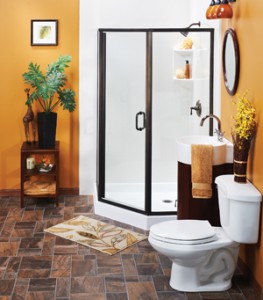 He said Stand in the shower. Reluctantly, I did. He reached in to turn on the water and, you guessed it, nothing!   When I stepped out of the shower, he slid the toilet over about a foot. No waste pipes, no water pipes.

Stunned at what I had just witnessed, the explanation followed:  The previous owner had set up this bathroom to look as though it truly existed. Standard fixtures, tile floor and fiberglass shower, ALL FOR SHOW.  They never checked during the walkthrough to see if it was real or not. Who would?  This was long before home inspectors and people just didn’t do those type of things.

We did the project and convinced them to re-use as many of the existing fixtures as we could. They were delighted to have a WORKING bathroom.

Do I have to tell you what the lesson is here?  It’s never over till the toilet flushes!