Time spent in any business seems to generate anecdotes about experiences and situations that are just too funny to be true.  After 36 years in the remodeling business the stories have begun to pile up.  Some of them are serious, some funny, all of them true with something to be learned.  Doug Cornwell: VP of Operations, Alure Home Improvements

My remodeling career has afforded me the opportunity to experience various aspects of the business world. When I had recently graduated from college, I started in the contracting business as a salesperson. Sales was not a career I would have chosen at the time but I’m glad I did. I became proficient at designing and selling bathrooms for a local plumbing contractor who had begun a remodeling company as well. We were a well known local company who held the first plumbing license in the town we were located. Our reputation as a plumbing contractor was one of quality, reputable work and that allowed us to be successful in the remodeling business. We did many projects in a relatively concentrated area and while working locally was efficient, it did create some problems.

As with many companies, we normally begin projects on a Monday and this particular Monday was truly no different than the rest, or so we thought. We dispatched the crew to the scheduled customer to begin another bathroom remodeling project.  We had confirmed the start on Friday with the homeowner and planned the two week project accordingly. The installation crew left the shop about 7:30 AM and were only going about ten minutes away to the customers house.  Imagine my surprise when I received a call from the homeowner at 9:30 and she informed me the crew had not arrived yet. I relayed the fact that the guys had left two hours ago and certainly should have been there by now.

The next part will be hard to imagine.  There were NO cell phones, NO beepers, NO GPS tracking, and NO way to contact the crew until they called me!

The homeowner was becoming anxious.  I felt obligated to go over to the customer’s house and try to limit the damage this had caused. I headed out and several minutes later turned on the block where we scheduled to do the work.  As I headed toward the house, I saw our truck in the driveway. Confused and now somewhat angry, I continued toward the house. As I got closer, I realized the truck was on the wrong side of the block and at the wrong house. 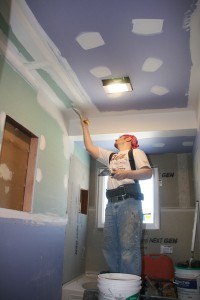 The crew had read the #4 as a #7 and went there to start the work. Coincidentally, we had also signed a project at #7 and when the crew showed up, the homeowner thought we just forgot to tell her we were coming so she let them in to start. The homeowner at #4 saw the truck but thought nothing of it. The solution: we continued the project at #7 and rescheduled the one at #4. Thankfully, they both were very understanding.  Today the crews have phones, GPS and accurate instructions.

The Lesson? If you’re going send your crew to the wrong house, make sure it is someone who you are also doing business with.

Has something like this ever happened to you? Do you have any strange but true remodeling or home improvement stories of your own?