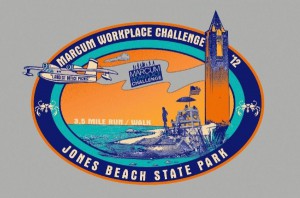 Tuesday night, July 31st I found myself in the midst of 7,200 other members of the working community of Long Island.  The people at Marcum LLP sponsor what has become known as Long Island’s largest participatory event and the greatest office picnic.

The Marcum Workplace Challenge is a 3.5 mile run/walk and was held for the seventh consecutive year at Jones Beach State Park.  Its purpose is to build camaraderie among employees, offer networking opportunities while having fun and to help people focus on staying healthy.  This year’s attendance was comprised of over 200 Long Island companies who had elected to participate.  One can’t help but be amazed by the temporary city of tents representing these companies’ and it all came and went in a single day’s time.  I was equally in awe by the turnout, having witnessed it for the first time and for me it was a spectacular evening.  The combination of the run/walk and then to have the social atmosphere of a picnic made it a great night for everyone.

The charities that will benefit from the events proceeds are Long Island Children’s Museum,  Long Island Cares –The Harry Chapin Food Bank,  and the Children’s Medical Fund of New York.  The event has already raised over $150,000 for local charities.

One of the many awards that are a part of the evening’s festivities is the Spirit of the Race award.  It honors John E. McGorry Jr. who instituted the “Challenge” as part of The Long Island Home’s employee wellness initiative in 1986.  Alure Home Improvements selected this year to add focus to their employee wellness and chose the Marcum Challenge as one of the many ways to achieve that goal.  Telling our story and that the collective weight loss achieved thus far in 2012 amongst the employees has exceeded 200 pound ultimately won us recognition as the Spirit of the Race award winner. 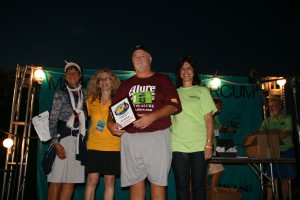 Proud of the achievements of all the Alure employees, Doug Cornwell, VP of Operations accepted the award on their behalf.   This event gave Alure the opportunity to further develop as a cohesive team, continue our commitment to health and wellness and at the same time, along with many of the top companies on Long Island, support some very worthwhile charities.  We look forward to next year’s event and increasing our participation, said Cornwell. 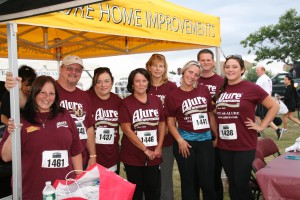 Certainly a great adventure for friends and family alike, for the 30 plus people from Alure, it’s safe to say the event was a success again this year.  Part of our mission is to find other great ways to help local community charities and this event provided just that avenue.  We will continue to be a proud participant of the workplace challenge. 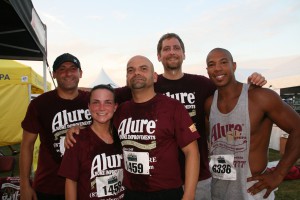 A special mention goes out to our runners from Alure who went the extra mile to give it their all. (From left to right, Roman Gorelin, Annie Vines, Sal Vines, Seth Selesnow and Marc Gilmore)