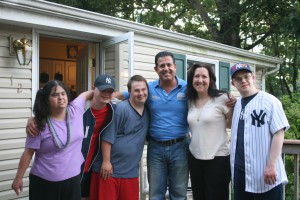 On June 20th, 2010 the Lutz Family of East Setauket got a surprise visit they would remember for the rest of their lives. Sitting front row at Yankee Stadium, Kathleen Lutz, along with three of her siblings (Daniel, Timothy and William) were excited to be guests at the NY Mets vs. NY Yankees game. According to a close family friend and nominator of the family, Kathleen was under the assumption that the game was a consolation prize after not being selected for an upcoming build that Extreme Makeover:Home Edition was planning to do on Long Island. Little did they know, this was just setting the stage for a truly unique “door knock” with a New York style twist… While the traditional door knock is typically done right at the receiving family’s front door, the extreme team did this one a little different. Ty made the surprise announcement to the Lutz family from the pitchers mound at Yankee Stadium for the jam packed crowd to see on the Jumbotron! After the Extreme design team brought the Lutz family to the pitchers mound, Sal Ferro, President/CEO of Alure Home Improvements led an army of blue shirt volunteers to the middle of the field to congratulate the family for being selected.

Having completed 7 previous builds for Extreme Makeover:Home Edition, Ferro was excited to bring another build to Alure’s backyard… Long Island. “We are thrilled that Extreme Makeover:Home Edition has selected a Long Island family for this makeover and we are excited to not only make a difference in the lives of the deserving Lutz family, but to also play a major role in inspiring the Long Island Community to come together for a great cause.” says Ferro. So why does Alure do these builds time and time again? While Alure is active in the community, few scenarios present the opportunity on a  national platform to help inspire others to join together and make a difference. “We have always been a leader in our industry not just with our remodeling innovation, but also with our commitment to customer service, integrity and our charitable support for the community. This is just Alure being Alure, making a difference for everyone including the family, the community, viewers of the show, our employees and industry” added Ferro. 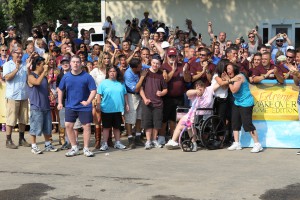 THANK YOU LONG ISLAND! Without the incredible outpouring of support from the community, this amazing feat would not have been possible. Right from the start, Long Island displayed an overwhelming amount of support for this cause. Unlike past makeovers, Alure had a unique opportunity to let the community know two weeks in advance that Extreme Makeover:Home Edition was in fact coming back to Long Island and that the family and address would be released at a later date. A week before the door knock, Alure held a Pep Rally at L.I. Ducks stadium which was graciously donated by L.I. Ducks owner, Frank Boultan. Long Island showed up in full force! The stadium was packed with adults, kids, families, companies, non-profits, clubs, etc. all looking to volunteer, donate and get involved any way possible for a family they didn’t even know yet. The evening was full of entertainment, starting out with Jed Morey of the Long Island Press introducing Sal Ferro out on to the field to say a few words about Alure’s long history with the show, and the process leading up to their eighth build. The theme of the night was… Community. “Alure leads the build, but it takes a community to make it work,” says Ferro. The night continued with the cast and crew of Extreme Makeover:Home Edition talking about the show, performances by local band “Something Fresh” and John Hampson, lead vocalist from the band Nine Days, a visit from Suffolk County Executive Steve Levy and much more.

Back in 2004, Alure was the first contractor in the shows history to join the extreme team at the surprise door knock. For the Ali episode in South Ozone Park, NY, Sal and Doug joined the team and got to witness Lucy Ali run out of the house overwhelmed with excitement as she kneeled on the ground with her two sons, Paul and Kuran, and began to pray. Alure has since joined the show on every door knock. So it was no surprise when the Alure team was right there to give the news to the Lutz family.

About the Lutz family: Unable to have children of their own, the loving couple Grace and John Lutz gave their hearts to 18 adopted kids, 7 of which were born with Down Syndrome. After the couple past away, one of the adopted daughters, Kathleen, gave up her career and gladly came home to take care of six of the Down Syndrome siblings who currently range from 20 – 25 years of age. Tragedy struck again when Kathleen suddenly and unexpectedly suffered from a grand mal seizure, and was diagnosed with inoperable cancer. Another one of her brothers, John Jr., had to move back home to take care of all his siblings and leave his successful career as a gymnastics coach. Kathleen’s health is now stabilized and both brother and sister care for their family as a team. “It’s all about giving back to the Lutz family. We’re out here working hard for them.” said Ferro just after coming out from behind the house where they had just installed a new pool for the family. While the build was going on, the Lutz family was not too far away, vacationing in the Hamptons. When the Lutz family returned on Sunday, June 27th they arrived in style sporting a yellow cab stretch limousine for the “Move that Bus!” part of the show where the Lutz family got to see their new home for the first time. Immediately after exiting the cab, Daniel was so overcome with excitement upon seeing his new home, he threw his hands in the air and ran up and down the street giving everyone handshakes and high fives as if he had just won the NYC Marathon. All the while, Kathleen was overwhelmed with joy as she broke down into tears in Sal’s arms. These are the moments that are unforgettable and these are the reasons Alure volunteers their efforts for deserving families on the show. “We had one reward, and that reward was… reveal. That reward was knowing that family’s life would be changed when that bus was moved. I’ll never forget that memory, I’ll never forget the feeling of watching that boy run up and down the street slapping people five with such excitement and such happiness, of watching Kathleen Lutz just break down and cry, of watching what a whole group of people, a community, can do to help make a difference and change someone’s life.” 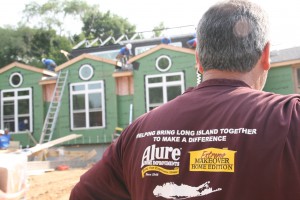 There are many challenges and obstacles when it comes to building a new home. Can you imagine trying to do this in just 4 days? Having done 7 previous builds for the show, Alure knew that these challenges can and would come up during the course of the week when building. The week started off very smooth. The plans were drawn, schedule was in place and the demolition of the existing house took only 20 minutes! As the sun was setting, the team was preparing for a night of excavation and removal of the previous basement structure. The forecast that night was calling for rain, but no one was expecting the downpour that hit the site. 2″ of rain fell that night making it very difficult for the crews to dig the 3,000 square foot hole needed for the basement walls and foundation to be constructed the following morning. After a sleepless night of digging and prep work, the rain subsided and the newly excavated hole was ready for construction. That’s where the giant cranes came in. The cranes played a huge part throughout the week in various parts of the build. The basement walls were manufactured off site, brought in on trucks, then craned into place and secured. The atrium frame was assembled in the road while the house was being built then hoisted up over the house and dropped into place, with each giant pane of glass being placed afterwards, one at a time. On an even larger scale, the pool, septic system and dry well were all transported and installed with the use of the cranes. After the rain had passed, the next major challenge was dealing with the record high temperatures all week. Framers, sheet rock crews, roofers, siding crews and all other labor going on at the same time, working in a tight space can make the heat that much worse. Thankfully there was an overwhelming amount of support from the community who made sure there was plenty of ice and water on hand. The volunteers played a huge role in keeping the workers hydrated, this way they could continue to work around the clock. Can you imagine building in that type of condition? After getting the actual structure of the house built, sided, roofed and sheet rocked, all of the smaller tedious work still needed to be completed for reveal day or “Move that Bus” day. One of the challenges here was that you now have everyone inside of the house working on top of one another to get it done. There were painters working with kitchen installers, wallpaper hangers working handin hand with flooring crew and so on and so forth. “The team comes together and bonds better than anything you could possibly imagine. It is by far, one of the best team building exercises we’ve ever done.” says Ferro. When doing these builds for EMHE, the actual home is often very unique. In this particular case, without giving anything away, the interior of the home was finished with a lot of exterior material to give it an outdoor look and feel. This made it much more difficult than just putting up sheet rock. With the heat being an issue and a lot of the material used for the house being stored off site, there is always a need for Gators to get around easily and quickly. As the show ran short on Gators, a local volunteer from down the street, Dave Morse, was able to get 7 golf carts donated for the week and actually had police escorts leading and following the card drivers to get them on site. The build would not have been possible without the support of all the volunteers, but this created yet another challenge for the team. Coordination of over 2,500 volunteers is not an easy task and everything possible was done to get everyone involved. As the show does not allow kids under the age of 18 to be involved in the actual build, Alure was able to coordinate an activities tent where kids could get involved in contributing to the family in some way. At the community ten, kids were building birdhouses and painting murals that served more than one purpose to help the Lutz family and were able to play games in the media trailer.