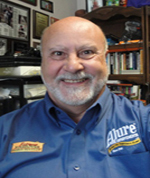 Carmine Auriemma was born in Naples Italy and came to America at the age of 5 on the Andrea Doria.  He has always had an interest in the construction industry.  For as long as he can remember, watching his dad as a master brick layer,  had always sparked an interest.  As a result, Carmine’s passion was in design and alterations, which he has been a part of for over 25 years.

Carmine received a Certified Remodelers Degree from the National Association of the Remodeling Industry (NARI) as well as a BS from CW Post and an MBA from Dowling College.

1.  Family— Carmine loves spending time with his huge family.  He has 6 children and 17 grandchildren.

My clients were expecting a baby and so they wanted to update their house in order to be able to have their master bedroom on same floor as the rest of the bedrooms and to create a nursery room for the new baby.  Their master bedroom was originally on first floor, while the rest of the bedrooms were on the second floor and they also needed to expand their kitchen so that could have an eat-in kitchen as well as a formal dining room.

We decided to expand their kitchen by building a side addition to enclose their existing breezeway between the house and the garage thereby giving them a kitchen space that was about twice the size they had before.  A new kitchen was designed for them which allowed them to have the island and cabinetry space that was much needed.  This also allowed them to have a formal dining room in the new expanded space created by the new addition.

For the upstairs, we redesigned the space to create a master bedroom, two additional bedrooms and an office.  In order to give the house some curb appeal,  we added a front porch with a new portico.  Our design imaging process for the exterior of the house enabled them to choose the siding and roofing colors that made their house their “dream home.”

no images were found

Click Here To View Some More Of Carmine’s Work

Alure Home Improvements Home Improvement
“I absolutely love our new shower surround, it was beautifully installed.”
Marilyn T. Home Improvement
Alure Online Specials
View A Complete List Of Our Specials
Some restrictions apply, click the button below for more details.
Learn More
Schedule a
Consultation
Alure Design Inspiration
Like what you see?
There's no better time to
Get Started!
Contact Us Today to Create Your